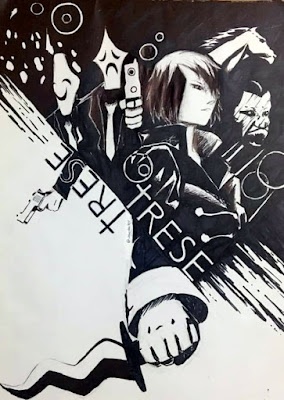 This is my daughter's Trese artwork which she made in early 2020 using only a marker and a pen. She was only 16 years old at that time and already a huge fan of this popular Filipino komik series by Budjette Tan and Kajo Baldisimo. When Netflix announced that they will release the animated version of Trese in 2021, she could not contain her excitement!

Finally, on June 10, 2021, the Trese TV series was shown in the US and released the next day globally. My daughter kept bugging me to watch the TV series in Filipino, English, and Japanese version, haha. I might binge-watch it next week when I am done doing other important stuff.

How about you, have you watched Trese already? Which version, dubbing rather, do you like best? As for me, I do not mind listening to the voice actors, but I have to admit I am used to listening to Japanese anime with English subtitle :D