I haven't been biking for many years, and I was so happy to ride a bike again. But, when I said, many years, it meant 30+ years! When I was a kid, I didn't have a bike. I did not own one 'cause my parents did not buy me one nor my brothers. I actually learned from our neighbor's bike that he just "parked" outside his house. So, when he was not using it, I kind of borrow it, lol. 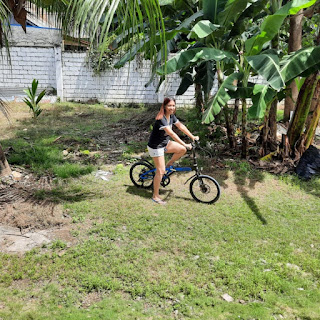 We lived in an apartment, and his house was just beside ours. So it was not only me who learned from his bike, my brothers, and other neighbors as well. The bike owner did not really mind us using his bike as long as we returned it in good condition. I didn't remember him getting mad at us, or maybe we were just sneaky, lol. But bless him and his bike because many of the kids in the neighborhood learned how to ride a bike without the help of our parents, haha. That was in the mid-'80s, by the way.

The last time I held a bike was probably in the early '90s. I was hesitant to ride that time because I haven't been practicing, but I remember I could maneuver it. And then, that was it. That was the last time I remember, and I haven't been biking ever until very recently. I already have two kids, quite heavy than in my teens and lack of exercise, hahaha. 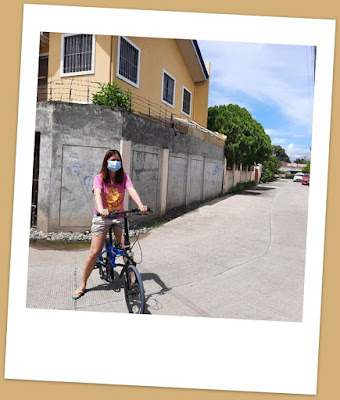 I could not contain my happiness when I realized I still know how to ride a bike. It was my nephew's and I tried to borrow it. I was not confident at first, I thought I totally forgot how to use the pedal. My brother told me that once I learned how to bike, I would not definitely forget it. So, I decided to adjust the height of the bike coz it was probably too high for me. And viola, I felt free as a bird. I realized how I missed riding a bike. The following day, I borrowed the bike again to ride on the street outside while quiet at that time. Now, I am thinking of buying a bike for me instead of my daughters who are not a bit interested in riding a bike, but I hope to influence them because aside from that, it is fun, it is a good exercise.
Posted by Cookie at 10:29 AM