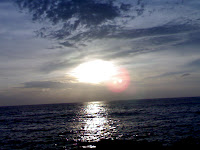 "The Island of your imagination"
When I was young, I’ve been living from one place to another because of my dad’s work. We’ve been transferring from one place to another in Mindanao every year. These are the places I happened to live: Oroquieta City, Ozamiz City, Iligan City, Cagayan de Oro City, Gingoog City, Butuan City…And as I blossomed into a young lady, I’ve been everywhere, too. I was actually trying to tour the Philippines. I went to Davao, General Santos, to Cebu, Bohol, Manila, Subic, Tagaytay/Batangas and as far as Baguio City. When I just got married, I was lucky enough to have toured the U.S. of A…. but never was I able to visit CAMIGUIN – “the land of your imagination”, as they quoted.

When my dad was still alive, he kept on promising me that we can have a vacation with him to Camiguin …But it had never happened. I did not resent, though, but I was thinking of going there myself or with my friends. My barkada once invited me to join them to go to Camiguin but my parents refused because it was a Holy Week. It should be a time for contemplating, praying and not to have a vacation somewhere else…

And when I got married, my husband Glenn is the one promising me to take me to Camiguin but it was never utilized. Every year, Glenn & his officemates were sent to Camiguin for a yearly planning so he was always on this island for many times. And after more than 6 years of blissful marriage and having an almost 5 year old daughter, I thought I can never have a vacation that is far away from our home.

But finally, I was on this island May of 2008. It was not even actually planned. It was a spur-of-the-moment plan! So, who does not believe in ‘dreams do come true’? Coz mine did! It was a tiresome travel even though we brought our car with us. And I was not used anymore in riding a boat. My daughter was a first-timer in everything but was so excited to think of riding a boat, staying in a hotel with a swimming pool and looking at the beach. And everything paid off when we arrived. It was indeed an island of my imagination. We stayed at Paras Resort, happy to be greeted and welcomed with free drinks and borloloys. View was awesome that I took many pictures in my cellphone and digicam. And of course, the presence of my family made everything complete in this very much delayed vacation in Camiguin. 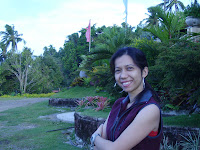