When we were in our preschool years, we made friends and play with other children our age. As we enter into our school–aged years, we made friends with same gender and finally having someone whom we call our best friend. That will go on until our adolescent years; however, this time we welcome heterosexual friendship. We can even have best friends who are our opposite sex. And some would go as far as ending up together but others ain’t so… Well, let me begin to tell you about my friends.

I was in college when I experienced having a group of friends or shall we say ‘barkada’. Usually, I only have about 1 or 2 (or 3 the most) when it comes to having friends. Perhaps I was just too picky. I do have a group of barkadas in my high school days but it didn’t last long. I can’t stand obnoxious, irritating, demanding or dramatic kind of friend so I’d ‘better have few friends than to have more friends and have more enemies’ – Well, that became my motto until I met some awesome, funny, sincere, weird kind of friends. We were a group of 13 – 7 boys and six girls.

We actually came to know each other because we joined the same organization. But the idea of creating our own group out from that organization just popped up our minds 1 day. I think few of the reasons were, we have the same ‘wavelength’ and also, we belong to the same age bracket (obviously)… And even though during those years some of our barkadas became an item, none of us ever ended up together…I think it was better that way, hehe. We were supposed to be friends! And friends should treat each other like brothers and sisters.

I sometimes felt nostalgic hearing the song of Michael W. Smith’s FRIENDS because it was our group’s theme song. I’m always reminded of my friends whenever I hear this music that was once dear to our hearts. We even had our motto in life, bisaya lang like: Sa kapit-os ug sa kahamugaway…I think it meant ‘For better or for Worse’. We also had our handshake greeting but I can’t demonstrate it here.

Some of my S.U.S. friends are now living outside the Philippines, some are just right here and most of us are married already, except for 1? Am I right? And most of us have cutie kids, too!

S.U.S…well, you might be wondering what it stands for. Originally, we created Kingdom of SUS and we even have a King and a Queen. I guess I was a Princess in that group, hehehe. Corny it may sound but we had fun, so what?! And oh yeah S.U.S. stands for Sano ug Sana. I think it’s a Boholano term for Amigo and Amiga but others would interpret it as – Crazy guys and Crazy gals. Whatever, I go for both.

gipicturan ko nlng kay di pa uso ang digital cam, wa pa jud koy scanner!
- naa gani mga duwende nakasampa sa among photo op -
I missed these friends of mine. I wish one day we could have a get together again. Our last reunion was in summer 2002. I was newly married then, not sure though if I was the first to get hitched in our group, had my memory failure already.

Anyway, my S.U.S. friends are the most wonderful friends I have in College. We laughed together, went mountain-climbing together (who would ever forget Manlumot adventure?), cried together (duh), dined or went to lunch together and made all those crazy stuffs were just a glimpse of my memories. How I love to reminisce the past…I miss you all guys.

My S.U.S. friends are the following: Dondon/Donot, now happily married to my dear distant cousin Ann. Don is a PMMAer so he frequently sails outside the Philippines. He now has 2 beautiful children. Don, thanks for the genuine friendship! Anthony/T. Toink, a Mechanical Engineer, just married last year. All I know is that he is based in Visayas. A real gentleman, that’s Tonee Tee! Mark/Makoy is married with 2 kids na daw. He is operating his own carinderia somewhere in Nazareth. Guy/Tuyom (because of his fido-dido hair) is a jail nurse in Camiguin. He married my classmate in College and has kids. Jun-jun/Unyot is now residing in Abu Dhabi with his wife and son. He’s also a flight steward so I hope I could bump unto him somewhere around the world. Michael/Quil-quil/Papa Gins (because he loves ginamos) is a law graduate. He is married to a doctor and he is also a professor at Lourdes College. He teaches Economics. He is such a funny guy, never a dull moment with him and he reminds me of Chandler of Friends. I hope he and his wife will be blessed with kids soon. Lip2x/Lipax/Bolongkoy is still single but dunno if he’s unattached. Lipax is such a nice friend. He’s very attentive and can be trusted with secrets. He’s also very poetic, such a sweet guy. 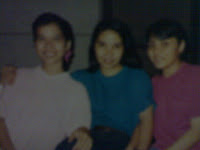 My girlfriends! Well, there’s Carlou/Yoyoy (because she used to be fond of singing Yoyoy Villame’s kind of songs, hehe). She’s actually my best friend and we were both members of XU Glee Club. I persuaded her to join my other organization and both of us, too, became members of S.U.S. I won’t dwell much on her here because I might write a long story about how we became best friends. Carlou is a single mother of a cutie son. She’s actually a Davaoeño but she’s currently residing in Cebu because of her work. Irish/Pantat, haven’t seen her in years but she’s happily married with kid/s (?). She’s sensitive, funny but a bit childish during our College years. Miriam/Tata, haven’t seen her in ages, too. I think she’s already married but I’m not sure if she still resides in Zamboanga.
Kathleen/Ngak (Becoz ingak is here favorite expression) is happily married with 1 guapito son. She’s currently residing in Bukidnon with her family. She could be both – extremely gay or extremely serious. Depends on her mood but she’s nice to talk to especially when you ask for some advices like matters of the heart. We were classmates for 2 years in grade school and we were classmates again in College. Karen/Gorit is married to my husband’s brother, so she’s my sister - by law, and they have 1 cutie son. Gorit’s a silent type but she could be funny, too. I like hanging out with her because she could easily understand me and we seem to have so many things in common, well, obviously (our husbands are brothers, got it?). Sometimes, you can see us both at the mall – ga rampa - it's our ‘Girls night out’. The 13th member is yours truly-Kukai. Married with 1 beautiful little girl. Even though my friends and I are apart from each other, I do think of them every so often. They made my College life interesting and worthwhile. To my S.U.S. friends, I hope you think of me, too, the way I think of you, hehe…naningil daw o. Bitaw, I wish you all well and I hope near or far, wherever we are, our friendship will always go on and on…