The New Prince and Princess of Wales

The news of HM The Queen Elizabeth II's passing may be a sad news but we have to admit that her health deteriorated when her husband, Prince Philip, died more than a year ago. At 96, she had served her country so well, even exceeded everyone's expectations. I may not be British but the Queen was a very integral part in our history. She was the very first image that came my mind when we talked about queens.

With a sad news came a very wonderful announcement. As King Charles III became UK's new monarch, The Duke and Duchess of Cambridge became Their Royal Highnesses, The Prince and Princess of Wales, as announced by the new King. 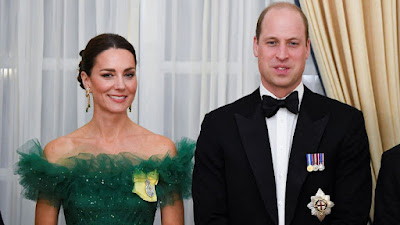 Prince William and Princess Catherine are my top two favorite royals. They compliment and support each other, they abide by the rules, loyal to their families and never said anything negative despite the attack they received from others. They continued to do their duties, was at the late HM's side when needed yet never forget their roles as parents to their young children.

It is also admirable to see them with Prince Harry and Meghan when they viewed the flowers for their late grandmother outside Windsor. As what I have read from a reliable site, Prince William invited his brother and sister-in-law to join him and Catherine for viewing. They even rode on the same car! I really wish that the two brothers' closeness will return, hoping that the other one would conform to what is required of him to do. And I hope Harry's children will live nearer to their grandpa, who is now the King, and spend more time with him and their royal cousins and other family members.