It has been over two years since the pandemic started, and it is a relief that things have slowly returned back to normal as of late. Many businesses have reopened and some schools welcomed back their students, although with precautionary measure. While we cannot be too complacent about the situation yet, there are also some good outcome especially to one's mental health.

I remembered when the pandemic just started and lock-downs were implemented in some areas, and I could not help but be bothered about the news. I cannot deny that it affected my mental health that I decided not to login to my social media accounts just to avoid reading negative news. Instead, I decided to watch fun movies, did some art crafts, or just play games online, and then I found out there are so many interesting online games that my children and I could play together.

Recently, I found another game that I used to play when I was a kid from the same website. I used to own a Tic-Tac-Toe board when I was about 12 or 13 years old. Now, it is so fun to play it virtually! My opponent was the computer that took the game seriously, huh. I played the seven-board grid and won several times and told myself I would stop when I reached 100 points, but it was so addicting that I reached 201 points but the score was an odd number so I continued until I finally reached the score of 301, lol! I just love this game. You just have to analyze and be vigilant on your opponent's next move. I was the first player and X (or cross) was assigned to me, while my opponent was O.

My 12 year old daughter played the Guess Who game. She likes it so much because she easily guessed the character. 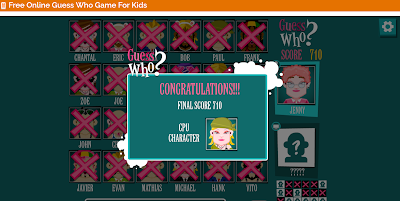 I also tried playing the Simon Says game but gave up on my second try because I cannot keep track of the next tune. My eldest daughter took over and found it interesting. She must have sharp hearing, as she kept scoring. But she missed on her 20th try when she got distracted. :)

Anyway, these games somehow helped divert my attention from reading or hearing some depressing news. This way, I got to spend some quality time with my kids, too.