My Daughter The Artist

I used to post her achievements or upload her activities on YouTube. I used to make a blog about her when she was a kid until time came that she doesn't want me to write or post anything about herself. I dunno if it's just a teenage phase or maybe she's just too embarrass showing off about herself, lol. I stopped doing it also as not to pissed her off. But glad there were times that she would still allow me. But for today, I will not ask permission from her. I got a feeling that she would find out anyways as she often stalk my blog 😃

This is quite late already but I was just proud that she landed 2nd place in their Filipino Digital Poster Making at school last August. She's more on visual arts and just recently joined Digital Arts so placing second was a big boost on her part. She was awarded online early September during their Virtual assembly.

Just to let you know that my daughter is struggling so hard in Filipino. It's hard for her to speak or write in Tagalog. She speaks English most of the time, or Visayan/Bisaya to some of her friends. And for her to win in one of their Filipino contests at school was a big honor on her part. Sharing to you a picture posted from their school, which I cropped and edited by the way, hehe. 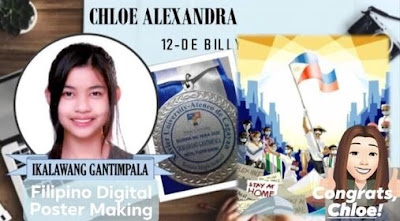