Paragliding is considered an extreme sport but according to experts, can be easily mastered. Sierra del Oro Leisure Park had its soft opening last April 26 wherein some people from the media were invited. I was there with my 13-year-old daughter, Chloe, along with other CDOBloggers and their kids. 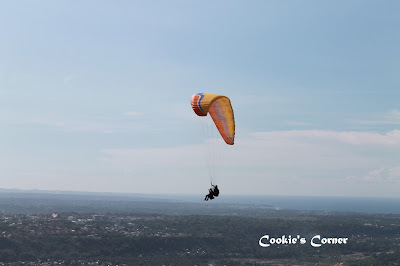 Most of us listed our names on a piece of paper should we want to try paragliding. My daughter tried it, I didn't :-)

So, I guess I will be sharing with you my daughter's experience then... We were there at 1:00 pm but my daughter was accommodated at around 4:00 pm. It was because the wind was light (yes, the stronger wind, the better --- coz it will take you higher and the longer the ride!) and there were only 3 licensed and professional paragliders available. Others were still coming Friday that week. When all licensed 'pilot's were still busy up in the air, we took pictures and videos while waiting for the others to come back. In case you asked, you are ONLY allowed to paraglide with a licensed paraglider. Without them means NO flying.
When it was my daughter's turn, she was instructed on what to do and what NOT to do before/during gliding. As a mom, I was quite nervous but excited for her. Of course, I could not help but get worried should anything happen to her (God forbid!). But I also believed she was in good hands with Sir Titoy so all I could do was pray for their safety. On the other hand, my daughter could not contain her excitement! Chloe had fun even though theirs was only cut short because the wind was already very light. Well, that was the mere reason why some of us were not able to experience paragliding that day (eherm!...excuses...hehe). Paragliding stopped at around 5:30 pm. Although they asked us to come back on Friday that week and Tuesday the next week, I wasn't able to because I was already on vacation with my family.

Anyhoo, sharing to you my daughter's video while paragliding up-close and personal. Check her expression...whatdyathink? :-)