Zoe Made My Day 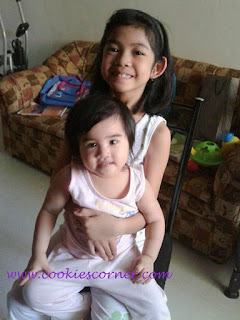 Chloe had her ballet rehearsal yesterday at 1 pm and it took them several hours to finish. They were preparing for their upcoming Nutcracker presentation for next Sunday. Their rehearsal ended at 6:30 pm where hubby was calling me to hurry up as he wanted to pay his bills at the store that would close at 7pm. I told him to prepare including the baby (they were left home). He said he would only go to a nearby store and be out for a very short while, so I said that we would go with him even just for a joy-ride.
Chloe changed her clothes inside the car while I picked daddy & baby. Zoe changed to her 'walking clothes' but hubby did not prepare her bag as he said we would be out for a short while. Usually, we always brought Zoe's stroller, bag with clothes, diaper, milk & bottle, wipes and rubber sheet. But yesterday, we did not bring any. She didn't even wear her shoes!

Along the way, hubby realized that he would not be able to reach the store on time. The mere fact that we have to pass by a heavily traffic road for there was a night Café at the heart of the city. Then, he suddenly thought of going to the mall so he changed direction. Chloe was excited as she wanted to go to that mall and see some toys (halleer!). So, off we went. But hubby said that we would just wait for him inside the car while he pay. Chloe protested, and so did I. Besides, there were plenty of cars at the parking lot and I don't feel safe. I decided to buy Zoe a new pair of shoes at the mall.

As hubby went to pay, the kids and I went to shoes section when I suddenly smelled a foul odor. I asked Chloe if she was the one who did it but she denied. Uh-oh, I said to myself. Not now, not this time!!

So, I peep on Zoe's behind and found 'something'. What a what! She just made my day! She didn't do this at the mall but why now?! I didn't bring her bag! Nothing at all! Good thing we were at the department store where they also have a Comfort Room. But prior to that, I hurriedly went to the infant section with the kids. I told Chloe to help me get some items like diaper, wipes and rubber sheet. Good thing she's quite old enough to understand. I gave her money to pay at the counter as I don't want others to smell Zoe's you-know-what! Chloe then told me that I should also buy Zoe a new stroller ~ again, hello! (slaps forehead) 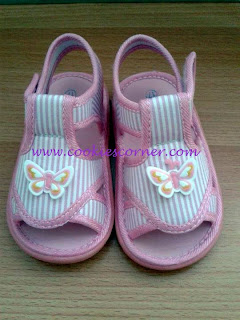 When hubby found us, I told him about our current situation. He was amused. I let him carry my bag and asked Chloe to go with me inside the comfort room where I will clean Zoe's bah-hind! Good thing there was a nappy changer inside the mall and their CR was not dirty. I got relieved after I cleaned her up. She really made my day!

While there, we decided to buy her a not so expensive shoes but the one I bought was quite nice to see. After I paid, I let her wore it and made her walk as she was quite heavy to carry. But she didn't make another move after doing some two steps. I've realized I bought shoes that squeaked. So, I carried her and stopped near the toy section. It was only that time that she tried to walk when she saw Mickey Mouse stuff toy, not minding her squeaking shoes anymore. Hmm, I'm planning to buy that toy next week as her Christmas gift.
We didn't stay long in there so hubby just bought food from KFC. While waiting, Chloe ate french fries from potato corner while Zoe was busy looking some toys and other items at the mall. We stayed there for less than an hour then went home. So much had happened for so little time, eh?
I'm linking this post to:

You have beautiful girls Mommy Cooks!

I have a simple Christmas giveaway ($25.00), join us when you get a chance. You can see the details here here Happy Holidays!