We just had our whole kitchen renovated including the sink. My daughter was so happy to see the result when we came back to our house because she said it looks like we were in a hotel. However, I was hoping to get that double bowl undermount sink for it offers a lot of advantages in segregating things. Hubby promised me that he will have it change later for the item was not available at that time he was purchasing it.
Posted by Cookie at 3:16 PM 2 comments:

I often go to my daughter's school when I met a friend. She said she and her husband waited for their son. If only she did not mention her husband, I would have a hard time recognizing him. He totally lose some weight and I could barely recognize him. He admitted he took some weight loss pills but he also combined it with exercise. He said he felt healthy and fit and I seem to agree to what he said!
Posted by Cookie at 3:03 PM No comments:

As soon as the calendar hits August, it was kind of busy at my household. After my eldest daughter's first quarter exam ended, she had cough, cold and fever. Then, the following week, they celebrated their Civics, Nutrition and Filipino Week ~ but more on Linggo Ng Wika week. She was busy preparing for her storytelling in Filipino and when that was over, she attended their salo-salo of native food at school. But when some of their activities were not graded and her attendance was not needed, I let her rest at home so that she will be fully recovered from her cough.

For this week, Chloe prepared her storytelling in English. She was called this morning because she volunteered. She said she doesn't want to be the last to be called. I'm glad at age 8, she is that brave and so eager to face the audience. They were also given a note inviting them to audition for some sort of a Talent Show. Chloe is so eager to audition because she wanted to perform onstage but I refused. Not that I don't want her to but because I knew that she still needs to practice a little. She wanted to sing but she's not been practicing it for over a year. I guess it needs to be polished and we have a very short time to do it for the audition will take place tomorrow afternoon, I guess.

Next month, it will be their foundation day so they are now busy preparing for their presentation. For the 2nd grader, they will have a mardi gras and my kid's also excited on what she will wear. She's thinking about the carnival that she saw in Rio the movie, ha! ha! Well, that's my Chloe! So eager to do a lot of things but am glad she always put her studies on top of her list.
Posted by Cookie at 8:57 PM 1 comment:

These days, it's very important to prepare ourselves for the future. We don't know what's in store for us or what may happen to us so I guess the best way for us to do is to be ready. If you are interested, you might want to check life insurance quotes in this particular site and you can even compare rates. Getting insurance for me is quite necessary and I'm glad I have one for myself for I did this not just for me but for my family, especially my kids.
Posted by Cookie at 8:45 PM 1 comment:

Last week, I posted about Baha’i House of Worship in my other blog as entry for WW, Nostalgia and TT memes. But there were so many spammers that I tried to moderate the comments. For this week, I decided to post my entry here. Besides, I like to share anything personal in my Cookie's Corner blog =)
More than 9 years ago, hubby waited for me at the altar to say our I do's... 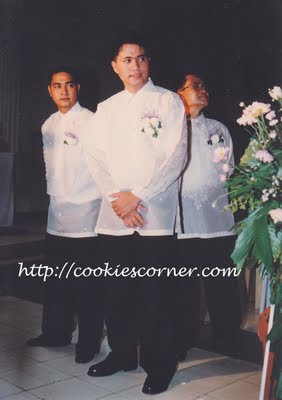 You can see on his face how excited he looked as he saw me marching down the aisle, hehehe. Yep, that's my hubby, Glenn, at the center. On his right side was his younger brother (who was his best man) and on his left side was his dad, my father-in-law.

I personally liked how this picture was captured. It was so natural and had a nostalgic effect...
My entry for: