I received an email today from one of summit media's magazines, Disney's Princess, informing me that Chloe's picture is featured on their March-April 2009 issue. So, I hurriedly went to the nearby store and look for their magazine. Alas! I found it and bought 4 issues, hehehe. Of course, I'm going to give the other copies to Chloe's grandparents :)

You can see the picture of Chloe below. She's wearing a mermaid costume and wearing a very big smile (just click the picture to enlarge). I hope you can buy their magazines, too. It's very entertaining and kids will really love it! 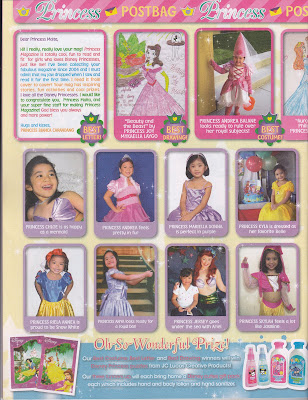 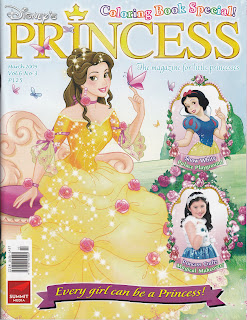 pretty good job you did on her pictures, Cook's. Chloe is very cute, indeed :-)

thanks for sharing the cover magazine and her little happy mermaid picture :-)

Hi Cookie ganda, Wow...Chloe's photo was selected huh. She really looked like a princess indeed in that magazine. Really a sweet and pretty mermaid. :)

Congrats!! wow its an achievement already.

That is great. Something you can keep forever.

Chloe is so pretty! :) I always buy Disney Princess Magazine for Chakai, and I have this copy as well... :) your daughter is pretty like her mommy! :)

Thanks a lot for all your comments. Chloe was really happy to see her pic at the mag. And yeah, this is something that I would like to keep forever ;) Thanks for being able to buy this mag, too!

Good day Ma'am! I hope it is not too much to ask, do you have a scanned copy of the entire spread of the page above? the drawing from the upper right is mine, unfortunately I lost my copy of this magazine.

I am so happy to at least saw your blogpost, I was able to know the magazine issue where I was once featured.

I apologized I just saw your comment now. Marami kasing spam sa messages, buti inisa-isa ko to remove today kaya nabasa ko itong comment mo.
I am not sure if I still kept this magazine. If makita ko, I will scan it for you but I hope ma message kita or you can message me. I will be checking here from time to time :-)