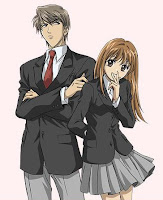 My husband is a huge fan of Anime. He’s so into Japanese stuff like the games in PSP or Playstation, and even tried talking to me about his Manga collection, which is also a Japanese product. If you ask me, I don’t know any of these. (Just ask me about Sanrio’s Hello Kitty because that’s all I knowJ). I wasn’t a big fan, never even bothered to watch and never understood any of these Animes that he was so engrossed in watching.

But one time, just last month, my husband was laughing out loud while watching an episode of one particular anime. It was a lazy weekend, with not much to do, so I sat down with him trying to understand what all the laughter was about. To my surprise, I ended up laughing with him, too. I think it was the story’s 17th episode already. I asked my husband to give me a little detail on the previous story, but soon I asked for more.

The title of the anime was Itazura Na Kiss or Mischievous Kiss. In the episode that I watched, Kotoko, a student nurse, was fuming mad deep inside at her classmates for admiring and fantasizing about Naoki Irie, a genius and very handsome medical student, who just happens to be her husband, but she didn’t divulge to them yet that they were actually married. Her classmates were even wishing (right to her face) that if Irie were married, they would try to steal him so that he would divorce his wife, much to Kotoko’s annoyance. Anyway, in the end, everyone knew because Irie came and talked to her. That episode was really funny and I JUST CAN’T believe I continued watching the series up to the 21st or latest episode! Now, I asked my hubby to give me a copy of the previous episodes because I wanted to watch and understand the story from the very beginning.

The story was actually cute and unique in some ways, especially in the early episodes when the two were still high school students. Kotoko was a high-spirited girl who belonged to Class F in their school but so in love with Irie, who is a genius and belonged to Class A. After mustering the courage to give him a love letter, she got totally rejected. Irie would then always reject her afterwards, but later it turned out that the guy really fell for her. In fact, they even got married, but the story still continues on after that. It was just so funny because in the Anime they exaggerate emotions or feelings, but I got used to it somehow. I don’t know if I would still watch another Anime title, but well, we can always change our views, right? All I know right now is that I’m very much looking forward to what will happen on the next episode of Itazura Na Kiss ;)

cooks! is this dvd or in TV?? am interested! is it 4 adults only? i love anime images... and won't hurt if the story and OST are good! pls ask Glen if he has the anime (original) version of F4... forgot the title.

Hey cool! A Hello Kitty fan!:D Do you know that Sanriotown has a travel contest going right now? It's at http://blog.sanriotown.com/traveltheworld:hellokitty.com in case you're interested.:)

tnx for the info. went to their site. luv it!!!