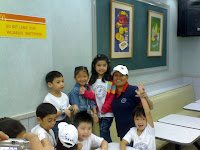 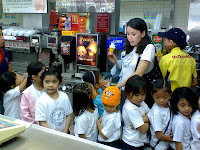 Chloe wearing white shirt & fuschia sweater; Kitchen tour at McDonald's with teacher
Last Wednesday, my daughter who is in K-1 had their field trip. She was so excited to join the excursion that she woke up very early in the morning (around 5:30 am). I whispered to her in bed to go back to sleep, so she closed her eyes – but I don’t think she really went back to sleep. They were to meet at school and leave at around 9 am, so imagine the time…

When we drove her to school, I thought their teacher would postpone their fieldtrip because it rained the whole night until that very morning. Good thing that it was not cancelled. However, one of the destinations would have to be excluded since they wanted to avoid any risks. That was fine, safety first before anything else. What was more important was for the kids to experience fun and exposure. Anyway, they were all so excited that I can't imagine their faces if ever the trip won't push thru. 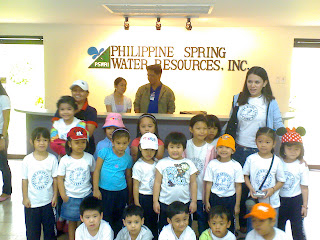 At Nature's Spring Processing Plant
My husband and I always try to be there for our daughter every time she has a school activity. Quite the stage-parents, aren’t we? (hehe). But well, we just want to support her, ok?!(",). And usually, she rides with us while most of her classmates would opt to ride in the school van. But this particular day, she told us that she wanted to ride together with her teacher and classmates. So that would mean that my husband and I would have to follow the van in a convoy. I tried to ask her thrice if she really wanted to, even telling to her (in a whisper) that her dad would want her to ride with us. But she was persistent. So finally, I conceded and handed her over to her teacher. When I was in our car with my husband, I realized that it was I who suffered separation anxiety. My little girl is growing up and is slowly trying to do things on her own! I got a little bit emotional on this, but then I had to accept it as a fact of life (sigh).
Posted by Cookie at 5:31 PM

cookie, yr little girl is growing up already. :) she looks so sweet. :)