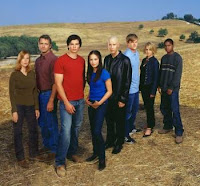 I’m so crazy over Smallville, I never missed one episode from season 1 up to season 7. Season 8 is still to be aired, and it’s kinda been killing me, hehe. I guess I still have one more month to wait. This is the only ‘Superman’ series that I really admire. I fell in love with the main characters, Clark Kent, played by Tom Welling, and his love interest, Lana, played by Kristin Kreuk. Of course, I want his best friend Chloe to be there for my Superman, too. I also like how Lex Luthor, portrayed by Michael Rosenbaum, delivers his intelligent lines. I’ve been an avid follower of the TV series eversince I was still pregnant with Chloe. How I 'd love to see Lana’s beautiful face on the screen. But I don’t get me wrong, I didn’t name my daughter Chloe just because the best friend of Clark happens to be named Chloe. I already had that name in mind even before I got hitched-- I got it from a popular line of perfume, see? Anyways, Smallville became more exciting to watch when some of the Justice Leaguers were introduced in Season 6 (and didn't you love Green Arrow, too? ). I was just a bit sad when I learned that Lana’s character will not be regularly seen on season 8. But whatever story will turn out , I will always be a fan of Smallville :)

Hi Cookie pie, that is good to know that you like that tv show. I seldom watch it though. Try to open this site http://www.fancast.com/home i just found that while i am here....it shows the full episode of my favorite tv show like c.s.i. and hell's kitchen. Happy Watching! I dont miss lechon too much coz I found a store that sells lechon here.Yap...hehehe.

I think Tom Welling is hot too! My sis is crazy for Smallville.. and like you, she's watched every single episode. I'm more of a Grey's Anatomy, Prison Break, Gossip Girl and Desperate Housewives kinda gal! :) But I haven't met anyone who was able to resist Tom Welling, though! :)