Praying for Peace on Earth

I have been monitoring the war in Ukraine since day 1. I was hoping that it would only last for a few days or at least a week and then there would be peace between two nations. But almost a month later, the war has gotten worst. I could only watch in horror and wept silently at home while reading/watching the news online. I could not understand why this could still happen in the 21st century. Sure, war still exists in other parts of the world but other 'warring' countries made sure that humanitarian aid is still accessible and people still have roofs above their heads.

But with the Russian-Ukraine war, civilians are targeted... Children, women, hospitals, schools, residential buildings are bombed by the Russian soldiers. Those who are trapped in their own country are deprived of food, water, medications/treatment. Worst, Russians do not take accountability on these but turned the table on the Ukrainians. I could not believe that one man could do such damage to the second largest country in Europe. I do not know when this war would stop but I pray it would end soon. I pray for protection for the people of Ukraine, especially those who are seeking protection at the bomb shelter. I pray for the soldiers that their lives may be spared. I also pray for the the Russian soldiers (who just followed orders), that they will have a change of heart and realized that saving lives are the most honorable thing to do than killing others. I pray for peace in these countries...I'm even praying for divine intervention or for a miracle to happen. There is nothing I could do but offer prayers.

I found this beautiful prayer online from a Methodist website. I am a Catholic but I would like to share this prayer and together let us recite and offer this to the people affected in this war. May peace reign on earth especially to our displaced brethren in Ukraine. 🙏 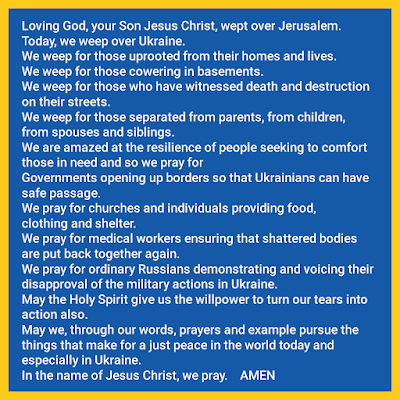