My Daughter Won 1st Place in an Art Contest 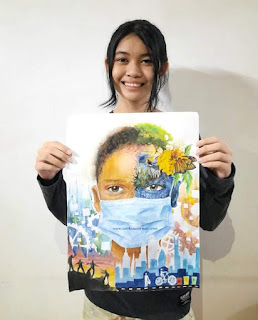 Congratulations to my daughter Chloe who won 1st place in DENR's Environmental Art contest for Grades 10-12 in Region 10. The theme was about New Normal Challenge: Sustainable Actions for a Sustainable Future.

The contest this year was a bit different and perhaps quite new for all the contestants. They submitted their entries online that included the story behind their drawings and a video of themselves doing the artwork.

As far as I could remember, my daughter started sketching at the age of 2 and a half. It was Christmas time and we bought her a gift at the mall already but she caught the eye of a MegaSketcher (she called it magic board that time) and she didn't want to leave without it. We never spoil her with material things but it was only at that time in her life that she sat on the floor and didn't leave the mall without getting that thing. We gave in but told her to promise us to never to do it again and she nodded (and she never did👏). As it turned out, the Megasketcher helped her improve her drawings in her growing up years. Later, her sketches were more developed until she finally let her younger sister inherited her 'old toy'.

Now, she's 17 years old, had joined many school competitions on traditional arts (won some, missed some). She started joining digital art only last year and even won a place at her school.

But DENR contest was a big thing for her (and for us as well). It was the first time she won first place in an inter-school competition and with no coach (because of Covid19 pandemic). She joined before but only landed in top 7 or top 10. Anyways, just wanna flex myself for guiding her this time and acted like a 'caoch', hehe.

Actually, I am not good in art and I have no talent like my daughter and the only thing I could be of assistance was to check if her drawing was in line with the theme or if her drawing was able to convey the message in one glance...oh, I took videos of her while sketching but it was she who did the editing then submitted it via email.

Anyways, I also checked the other entries and wow, I was really impressed to see the artworks of those talented kids. They all deserved to be in top 10 with their God-given talents.

So, congrats to all but most especially to my daughter who put much effort in this artwork. I should know coz I saw how passionate she was, how she slept late at night just to finish it but I was also glad that she somehow listened to me when I suggested something what to include and what to exclude :D

Again, congrats Chloe! You deserve it💓