Last August 20, 2010, I went to Chloe's school for a Parent Teacher Conference. Parents were asked to go to school to get their child's report card and talk to their adviser for some updates. I went there in the morning and so far, I got a very positive feedback on Chloe. Her adviser told me that Chloe's got a very good penmanship and creative, as she's very good in drawing in coloring. Actually, her preschool teachers already mentioned this to me so her comment was just an affirmation that she's good in that aspect. Her grade 1 adviser's only concern was that Chloe only had few friends at school, in fact, she thought she's aloof. But of late, she was glad that she gained few friends when she (the teacher) reshuffled them in their seats. I told the teacher that Chloe's a sensitive girl. When somebody's trying to bully her, she doesn't want to be near that child again. But I know my daughter very well. She's not a silent type but perhaps she became quiet when her teacher's around because she's a pleaser, hehe. She was aiming to get 20 super tickets that her teacher will mark on her notebook because she will be given a prize --- and she really got it! :p

But I won't deny that my child's a little bit choosy with friends and she can really live by her own self. She better draw or make some sketches than to play with others and ended up bickering. Still, I encouraged Chloe to be friends with others but not to follow the bad manners :-)

After I received her report card, I got a very big grin on my face :D. I'm proud to say that my daughter has maintained her good grades even now that she's in grade one and in a new school. She got straight A's in all her subject (Filipino, English, Math, Science, Civics or Sibika and Computer) the mere fact that I don't even pressure her to study everyday. I still find playing, napping and relaxing a very vital aspect in Chloe's life apart from studying. Her 2 A minuses were not academically related/graded so, I can say that my daughter's life is normal. It would be too hard to believe that she has no flaws at all, I want her to have fun or enjoy her childhood. As a proud mommy, I've scanned her report card that you can see below :D
The following day, Chloe and I went out for a short while and asked her what she wanted to get as a reward. She only wanted to buy the hat that she saw at the mall with a very cheap price so I bought it, hehe. Kids are really not that hard to deal with :D :D

Chloe's Report Card for the First Grading (click to zoom): 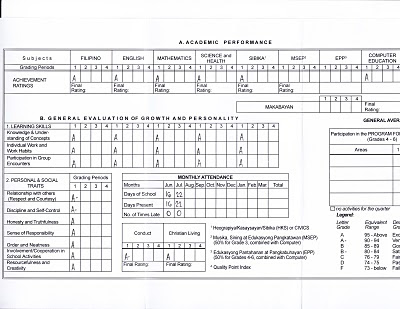 Congrats Chloe! She is a high achiever and a smart student. Mommy, I'm proud of her too.