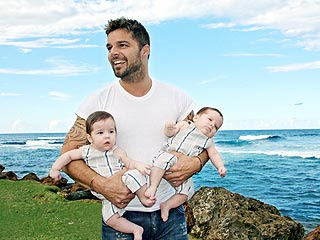 I had been wondering where Ricky Martin was nowadays. I used to have a huge crush on him during his Menudo days and even so when he went solo (made my jaw drop with his Shake your Bonbon and Livin' La Vida Loca videos).

But after that, I didn't hear any news about him for a long while. In the small instances when he's being talked about, his sexuality was one of the issues.. Hmmm...

Well, just today, I came across something from People.com which caught my attention, and here's what it said:

Born via surrogate in early August, Ricky Martin's 4-month-old twin boys make their debut in this week's issue of PEOPLE, on newsstands Friday.

A joyful Martin, 36, spoke candidly with PEOPLE at home in Puerto Rico about his desire to be a parent, the decision to seek the help of a surrogate and juggling caring for twins – he has no nanny!

Describe this time in your life

I'm so happy! Everything they do, from smiling to crying, feels like a blessing. Being a father feels amazing. This has been the most spiritual moment in my life.

How hands-on are you as a father?

I don't have a nanny. I'm doing this on my own because I don't want to miss a moment. I have a personal assistant who helps me, someone who takes care of me while I'm taking care of them, but I'm the one who changes the diapers, the one that feeds them, the one that bathes them, the one that puts them to sleep. For any parent, the first couple of months tend to get a little bit intense.

Why did you choose to become a parent via surrogate?

Adoption was one option, but it's complicated and can take a long time. Surrogacy was an intriguing and faster option. I thought, 'I'm going to jump into this with no fear.'

Tell us about Valetino's and Matteo's personalities

Valentino loves to sleep. I call him 'Mr. Peace and Love' because he's so chill and serene. Matteo is more alert and active. He was up at 3 a.m. the other night and just hanging!

What is your philosophy on raising your sons?

I love to read books to my sons and tell them stories. I play music for them so they develop their own personalities. I want to give them information and raise them with honesty and love, and give them self-esteem and a lot of acceptance.

I've been wondering what is up with Ricky Martin too and when I read about this last night, I was so surprised. I didn't know he was doing this, you know, having a surrogate mother for his kids. I thought he'd gotten married or something and would do it the traditional way. hehehe Those are two lucky babies! I wonder which one of them will follow in Ricky M's footsteps in the entertainment industry... we'll just have to wait and see.:)

Same here my Cooks.. I had a big crush on him ever since his Living la Vida Loca days...

He is so gorgeous and I could just faint once I see him in person...soooo handsome..

hey mommy cooks, i have a tag for you

wow! this is really coool!!! hehehehehehehe... so he joins our parenthood club! great post cooks!

I have a big crush on him too and Robby Rosa. hehe...it's nice to know that he's a father now. cutie kaayo ang mga babies! I'm envious.

wow ha...twins? That is good. Did you know that Erwin brag that he met Ricky Martin in Manila? He has so much to tell. Anyway, I like him alright, but,I am crazy over Charlie Rivera...hahaha...MENUDO time.

D... yah, was also surprised when I learned that he has 4-mo-old twins! And they looked so cute, too!

Umma..waah! so, crush pd diay nimo sya! hehe.. yes, he is so gorgeous. Be careful when you meet him, you might ran out of air, haha.

Soul Anchor.. ngparamdam jud sya no? I remember we spoke about him last week, hehehe.

Kring..bitaw no? where is Robby Rosa, too? I can still memorize his song 'If You're not here by my side', hehehe..

wow dont all the celebrities these days have twins??? coincidence huh? :)

yeah, me, too. was wondering why these celebrities were having twins nowadays. it made me think that maybe they are taking some birth control pills and when they stop using it, they will have a high chance conceiving multiple babies.. Hmmm, just one of the lessons i've learned, hehe.

And of course, these celebrities will be put on the limelight again... hmmm, just my opinion :D

But I cannot say this to Ricky Martin! Lucky for a surrogate mother to do this, toink2x :D :D

Thanks for this awesome post. I knew some wedding photographers in Tuckson. They can offer great photography services.