Not so long ago, a Taiwanese show was brought to the Philippines and it became wildly popular. The girls went ga-ga over it, be they young or old (let me include the gays, too). The title was Meteor Garden. For some reason, I didn’t bother to watch. All I knew was that it featured the four guys who were popularly called F4. I thought that was the name of their band. One of the reasons that I didn't feel like watching their show was because the language was dubbed into our local dialect. I just didn’t like watching shows that were being dubbed (And what's with the long hair?).

I mentioned recently that I went crazy over one anime show titled Itazura Na Kiss. It ended already and my husband recommended one show that he found interesting, also from the manga. But it was not an anime anymore, but a live action drama. The title was Hana Yori Dango. I didn’t bother to watch it either.

Then, a dear friend told me she would lend to me her Meteor Garden VCD Collection so that I could watch the show. I told her again that I wasn’t interested in any dubbed shows. I thought I could escape. Instead, she told me that her collection was not dubbed. It had English subtitles. Bingo! I told myself why not give it a try?

Before watching the show, I checked the internet first on how interesting the story was, only to find out that Meteor Garden was actually based on Hana Yori Dango. I was intrigued. My husband then told me to watch HYD first.

I ended up watching both shows. I watched MG on a Saturday and HYD on a Sunday. I seemed to enjoy both. 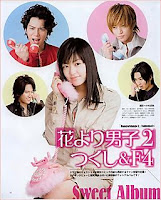 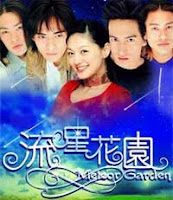 I cannot really compare the Taiwanese-made to the Japanese-made story. The plot may be the same but the presentation was different.

Well, to describe MG, their story was very detailed, but to the point that some scenes became quite dragging. However, you could easily comprehend everything that transpired in the story. In HYD, their show had very good cinematography, and it was more fast-paced, but to the point that the audience are left to analyze by themselves what really had happened.

But one thing was common between the 2 shows. I was so into that guy who plays the violin, hehe. In MG, he is Hua Ze Lei and in HYD, he is Hanazawa Rui. They both have the same charisma. What was only nice in MG was that the leader of F4 was equally appealing. In HYD, I can’t say their F4 leader looked bad but Hanazawa Rui made my jaw drop, haha. If I were the girl in the story, I would go for Rui. I found the actor (played by Shun Oguri) really cute and he played his character so well that any girl’s heart would melt. But well, that was how the story went. If you happen to read the manga, the leader really had a funny curly-tops hair.

So now I know what F4 stands for. A group of four arrogant heirs dubbed “F4” or the Flower Four. It was first published in Manga titled Hana Yori Dango, which meant Boys Over Flower. It was first dramatized by Taiwanese Actors titled Meteor Gardens. I’m not yet done watching both of these shows, though. But my weekend is reserved for them. Let me add that I learned a lot of Japanese words, too, from watching HYD, but Chinese is so hard to understand and speak, that I only know only one word of it, haha.
Posted by Cookie at 11:49 PM

So you were fascinated also with the group F4 huh? Who's the one that appealed to you the most?

I grew up in Taipei and the F4 was overwhelmingly famous in there but honestly, I just watched couple episodes of the MG bec I'm not really into drama thing. I prefer watching detectives story.

Hi umma! haha, yah, got fascinated with one of the Japanese F4 members played by Shun Oguri. He actually appeared in Azumi 1 & 2 (a samurai movie) and I already liked him there :) - I sound like a teenager now, haha.

Even though I'm more into suspense or action shows/films, but from time to time, I do watch drama ;)

hi cooks!!!!!! haha finally you made a review (and great one to compare and contrast both)... am interested in watching HYD... maybe this xmas break... heheheh mucho love!